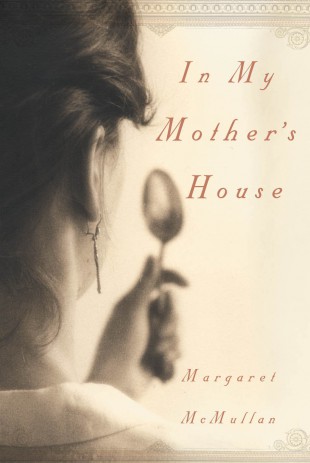 In My Mother’s House (St. Martin’s Press, November 2003) is a beautiful, haunting, and elegantly crafted novel about a daughter’s quest to understand her mother’s staunch commitment to silence about their family’s experiences in Vienna during World War II and how they were able to escape.

Told in alternating voices (Elizabeth’s and her mother, Jenny’s), the story is remarkable for its emotional fullness and rich details: the assorted family silver the grandmother mails back piece by piece over the years; Jenny’s wartime memories of music and her uncle’s viola d’amore lessons; the fragrant smell of the wood floors at Hofzeile, the family’s ancestral house in Vienna.

As Elizabeth begins to fill in the gaps of Jenny’s troubled memory, she stumbles upon a long-buried family secret. As she uncovers the details, she learns the true meaning of inheritance and how it shapes what we become.

In My Mother’s House looks at the pain and cost of a family struggling to regain what took them generations to build. It’s a poignant, expertly told novel that establishes Margaret McMullan as a novelist soon to join the ranks of writers such as Anita Shreve and Carol Shields.

Praise for In My Mother’s House

McMullan weaves together the narratives of mother and daughter, she dramatizes their survivor trauma and denial with haunting intensity. And the big questions are rooted in the story: Not where was God, but where was man? –

It is the individual, private pain it caused that is skillfully given voice here by Margaret McMullan.

Books with buzz: This haunting novel introduces two women at odds: Genevieve, an Austrian who fled the Nazis, and her Mississippi-born daughter, Elizabeth. The more Elizabeth tries to understand what her mother went through, the more Genevieve resists. Together they must learn to let go of the past and trust their future.

Growing up Catholic in the Chicago suburbs, Elizabeth wants to get back what her mother, Jenny, seems hell-bent on getting rid of - her faith, her family, her Jewishness. Jenny can't bear to talk about all that, hates it that Elizabeth is dating a Jewish boy (Ezra is such an ugly name) and that Elizabeth told the people at church about her Jewish grandfather's conversion to Catholicism before he escaped from the Nazis in Vienna. But as the mother confronts everything she wants to forget, she remembers her own rage at her father's denial, his desperation to assimilate as an upperclass Austrian scholar to whom Hitler's Kristallnacht was just an embarrassment, "a violent, noisy, anti-Jewish riot." How could her father have left his mother behind when he escaped? It's hard to write about obsession without being, well, repetitive. But as McMullan weaves together the narratives of mother and daughter, she dramatizes their survivor trauma and denial with haunting intensity. And the big questions are rooted in the story: Not where was God, but where was man?

When Jenny fled Vienna with her family during World War II, she disowned her Jewish heritage and her homeland -- but she can't keep her memories buried when her daughter, Elizabeth, sets out to dig them up. We learn the family history through the alternating voices of mother and daughter: Jenny finally tells Elizabeth of her childhood under Nazi occupation, when her lifelong bitterness toward her professor father began. Elizabeth, meanwhile, recounts growing up in suburban Chicago, when her mother seemed distant and inaccessible. Through their recollections, we see how family minutiae (a preference for parquet floors, a taste for warm honey milk) can have deep emotional roots. By the end, the two narrative threads blend into one harmonious story, proving that while we can leave a country, we can't escape our history.

This graceful, melancholy novel takes the form of parallel mother-daughter monologues that, significantly, never meet. The friction between the two women derives from a dispute over a family legacy -- not a material legacy, like the ornately crested silver that has followed the mother from Europe to America and will one day be the daughter's, but a legacy of truth. As a girl, Genevieve, now called Jenny, grew up in Vienna in a setting of privilege and cultivation. What she did not know until the Nazi takeover sent her family fleeing for their lives was that her parents were Jews who had become Catholic converts in the vain hope of keeping the wolf of anti-Semitism from the door. The trauma of this discovery, and the privations of life as a refugee, have caused Jenny to cloak her past in bitter silence, a silence her daughter feels as a withholding of love -- and has the neuroses to prove it. Jenny's narrative, in particular, is haunting, as her early memories of a charmed life acquire a darker coloration. The global catastrophe of the Nazi era we know about. It is the individual, private pain it caused that is skillfully given voice here by Margaret McMullan.

A critic and editor who lives in Newton.

In My Mother's House is a novel about family presented in interlacing and alternating perspectives of a mother and a daughter. The novel revolves around the women's coming to terms with memories of the family's past and their present identities. The mother, Genevieve, was born in Vienna before the outbreak of World War II. Her story is largely composed of her memories of her childhood in Austria and their grand home in Vienna, the Hofzeile, which was lost in the ravages of the war. As the daughter of a father who was a factory owner, a monarchist, and a professor of history, Genevieve describes her upbringing in a bourgeois household that evokes admonition to "never let American perfume touch your skin." But underneath this genteel comfortable life the family is battling increasing prejudice and persecution first by the Austrian socialists and then by the Nazi regime, and despite their conversion to Catholicism the family eventually has to flee to America. In many ways, Genevieve's narrative is a tribute to her own mother, Rosette, whose courage and resourcefulness save their lives; and it is a gift of the past to her daughter Elizabeth. For Elizabeth, born in Mississippi and living in suburban Chicago, her mother's European past is a mystery, unaccessible not only because her mother rarely speaks of the past but also because she is the last survivor of her family. As Elizabeth is growing up, she attempts to piece together the remaining fragments of family history in the form of the sketchy stories of relatives and the few heirlooms that were safely brought to America. A major point of confusion for Elizabeth is the Nazi persecution of her apparently Catholic family, a confusion that is only gradually resolved with her discovery of her Jewish heritage. Elizabeth's story is a classic coming of age narrative, a story of a daughter who tries to discover her identity. The symptom of Elizabeth's struggle to accept her roots is her eating disorder, which stems from the trauma effect of the Holocaust that still radiates into her American life. The novel touches on the complex psychological processes that intertwine the home of origin with the present home in America in a variety of ways that impact the identities of both mother and daughter. In this narrative of female identity formation, two generations of women struggle with the ghost of patriarchy in the figure of the grandfather. For Elizabeth in particular there are many mysteries: Why did her grandfather return to Vienna after the war, leaving his daughter behind in America? Why did he remarry immediately after his courageous wife, Rosette, died? And why did he exclude from his memoirs his own daughter and granddaughter? Who was he as a historian and family man? In writing the story of this family-- a story with autobiographical overtones--Margaret McMullan muses on the gendered histories that men and women write. She opposes the patriarchal history of the grandfather, a professor of world history concerned with facts and objectivity, with the histories that the women tell. The women's histories are marked by a longing for "home," the desire to know their roots, their "mother's house." Yet the mother's house is ultimately unknowable. Destroyed in World War II, the family's home is only available in memory and history and thus simultaneously symbolizes the desire for knowing the mother's past and its ever receding possibility to do so.

A wonderful book--lush and dreamy and beautifully written.

Author of Burton and Speke

A lovely duet between mother and daughter, between past and future, between Europe and America, between memory and hope. McMullan's voice shines like old silver, polished rich and clear. It's a story of vision and blindness, speech and silence, and the healing that comes from time--it's a book about love.

Author of And Both Shall Row

What an exquisite and elegant novel. This beautiful story of memory and identity, faith and family proves that Margaret McMullan is the next gifted writer to watch.

Pulitzer Prize-winning author of The Keepers of the House

A type of archaeological dig performed within the dark pit of a family's loss, In My Mother's House is surprising in its power to quietly, gracefully, infect the reader with yearning for the places we once claimed but shall never have again.

National Book Award-winning author of Easy in the Islands

Beautifully written, evocative, and shot through with the voice of authenticity. It not only shows with great honesty the relationship between mothers and daughters, but also how the ghosts of our ancestors--good and bad--shadow our lives.

Author of The Ghost of Hannah Mendes

Margaret McMullan's ability to storytell is a music she resonates against the heart's hard wisdom. In My Mother's House is an heirloom--one of those novels you pass on to everyone.

Author of My People's Waltz

A haunting and beautifully written novel about the great themes of memory and love. What a fine work this is. Margaret McMullan is a splendid new voice among us.

Compelling... McMullan's fascinating account of the complexity of survival will haunt and strengthen its readers. Understanding the traumas of earlier generations is the key to Elizabeth's own liberation in this transporting first novel.

Spinning like a two-sided medal, this exquisite novel alternates the voices of two women, and ultimately opposites start to merge: past and present, mother and daughter, Christianity and Judaism, bitterness and reconciliation. I salute Margaret McMullan's elegantly crafted prose, her beautiful restraint, her emotional honesty, and her storytelling power.

In My Mother's House is like all the best fiction--inevitable, necessary, and finally, almost involuntarily, like music, precise and permanent in the soul. Hurrah for Ms. McMullan.