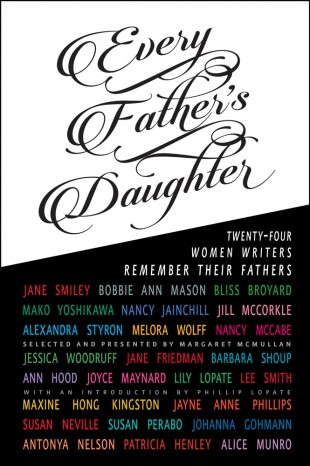 “What is it about the relationship between fathers and daughters that provokes so much exquisite tenderness, satisfying communion, longing for more, idealization from both ends, followed often if not inevitably by disappointment, hurt, and the need to understand and forgive, or to finger the guilt of not understanding and loving enough?” writes Phillip Lopate, in his introduction to Every Father’s Daughter, a collection of 25 personal essays by women writers writing about their fathers. The editor, Margaret McMullan, is herself a distinguished novelist and educator. About half of these essays were written by invitation for this anthology; others were selected by Ms. McMullan and her associate, Philip Lopate, who provides an introduction. The contributors include many well-known writers—Alice Munro, Jayne Anne Phillips, Alexandra Styron, Ann Hood, Bobbie Ann Mason, Maxine Hong Kingston, among others—as well as writers less well-known but no less cogent, inventive, perceptive, lacerating, questioning, or loving of their fathers.

From the Foreword by Margaret McMullan

“After my father died, I couldn’t read or write, perhaps because, in the end, my father was unable to read or write. I didn’t know it then, but I was looking for a collection of intensely personal essays, written by great women writers telling me about their fathers and how they came to know their fathers, a collection which might help me make some kind of sense of my own very close relationship with my father. I wanted to know from women, replacement sisters, if they had similar relationships with their fathers as I had with mine. Or, if their relationships were altogether different, I wanted to know how exactly these relationships were different. I wanted to know if the fact that my father was southern had anything to do with anything. I suppose, more than anything, I just wanted to know that I wasn’t alone in my love, my loss, my loneliness. I wanted to read this anthology, but it did not exist. Writers write the book they want to read. Editors do the same. This book came out of a need, my own, personal, selfish need.

“Eventually, I contacted the authors I loved and admired—some of them friends, some of them friends of my father’s. I never wanted this to feel like an assignment, but I suppose it was. I simply asked these women to tell me about their fathers. They took it from there. For some authors, the idea of writing about a father just clicked, and they wrote their essays, often within days of the request. We all have stories about our fathers, even if it’s a bad story or a non-story, it’s a story. If you write, you will read these essays and feel the need to write your own.

“I kept my father’s tastes very much in mind during the difficult but joyful process of selecting essays for this book. This collection reflects my father, and, of course, other fathers as well. These essays are a sort of collage or mosaic of fatherhood and all the ways daughters communicate or don’t with their fathers. Of course, there’s a long list of wonderful women writers not included here—this anthology really should extend itself into another volume.”

Praise for Every Father’s Daughter

As Margaret McMullan says in her foreword, "Our stories don't stop, even when lives end." Read full review.

...insightful clarity is on full display in Every Father's Daughter. In McMullan's foreword—which features a couple of the loveliest moments in the whole book—she talks about the passion for literature she shared with her father.
Read full review.

A treat for daughters, fathers, and anyone who enjoys exploring relationships and their many twists and turns. Read full review.

Margaret McMullan brings forth a powerful set of stories from 24 women that draws on the commonalities and differences of the father-daughter bond. Read full review.

Here are twenty-four ways of looking at fatherhood by an incredible host of writers, including Jane Smiley, Ann Hood and Alice Munro, among others. Read full review.

A 2015 "Sizzling Summer Read"
Best Gift for Fathers Who Read

...an honest, often heart-rending look at the significance of the father/daughter bond. The compilation's beauty lies in its contributors' willingness to express their raw emotions...McMullan's collection will help women to understand, cherish, or grieve their dads.

…rarely do we have the rich detail found in these essays from women writers who responded to an editorial request: ‘Tell me about your father.’…“Every Father’s Daughter” is a powerful gathering of tributes to memory, regret, love and sorrow. Read full review.

Want to dive deeper than greeting-card sentiments this Father’s Day? Acclaimed author and University of Evansville professor Margaret McMullan has the gift for you. Read full review.

This anthology is a treasure trove...By turns sentimental and dark, McMullan's stunning collection has a wonderful purity. Read full review.

McMullan’s selections likely fulfill the wish of many to address the loneliness felt following the loss of a father. “I wanted to read this anthology, but it did not exist,” she writes. Now it does, and readers will be grateful.