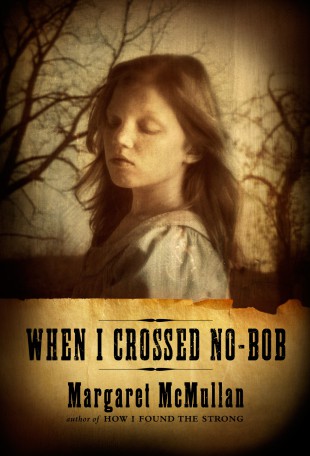 The Sequel To HOW I FOUND THE STRONG

Life as an O’Donnell is all twelve-year-old Addy knows, and life as an O’Donnell means trouble. Tucked away in a gray patch of woods called No-Bob, the O’Donnell clan has nothing but a bad reputation. So when Addy’s mama abandons her on the afternoon of Mr. Frank Russell’s wedding celebration, nobody is very surprised.

A reluctant Mr. Frank and his new wife take Addy in, and Addy does everything she can to prove that at least one O’Donnell has promise. But one day, Addy witnesses a terrible event that brings her old world crashing into the new. As she finds herself being pulled back into No-Bob and the grips of her O’Donnell kin, Addy is faced with the biggest decision of her life. Can she somehow find the courage to do what’s right, even if it means betraying one of her own?

Praise for When I Crossed No-Bob

The simple prose can be pure poetry…Readers will be drawn by the history close-up and by the elemental moral choice: doing good is hard, ‘doing nothing is the easiest of all.’

McMullan again proves herself to be a superb prose stylist, creating a haunting portrait of a place and a people ravaged by war…

Echoes of the present are impossible to miss--life under occupation, the reaction of the insurgent Klan, and aching poverty. It's the kind of book I love, one that makes me want to read everything McMullan has written. Twice.

Suspenseful plotting and language that whispers with the soft cadences of a Mississippi pine forest and crackles with wry wit.”

Set in Mississippi after the Civil War, this gripping historical novel tells of the bitter struggle among poor whites and the horrifying rise of the Ku Klux Klan. Twelve-year-old Addy O'Donnell, hungry, needy, and mischievous, relates the story in a spare present-tense narrative. Abandoned by her parents, she finds a home with her newly married teacher, Frank Russell, whose story was told in How I Found the Strong (2004). At times there is too much history and message woven into the story. The hate drama is compelling, though, and it becomes very personal when Addy witnesses a child murdered during the burning of a black school and discovers that her own father is the perpetrator. The simple prose can be pure poetry: "They are one of us. They are who we are. . . He is my poppy. He is who I am." Readers will be drawn by the history close-up and by the elemental moral choice: doing good is hard, "doing nothing is the easiest of all." Connect this with stories of Holocaust perpetrators.

Twelve-year-old Addy O'Donnell is a survivor. Growing up in the wild, lawless land nicknamed No-Bob, abandoned first by her father and now by her mother, she is taken in by Frank and Irene Russell, raised and educated. This sequel to the Civil War novel How I Found the Strong (2004) takes the story to 1875 in Smith County, Miss. McMullan again proves herself to be a superb prose stylist, creating a haunting portrait of a place and people ravaged by war: the burned-out land, Confederate war veterans, former slaves facing the menace of the Ku Klux Klan and the forced removal of the Choctaw from their land. If there's any reconstruction going on here, it's in Addy's soul, as she, like many people, is learning to be free-of her abusive father, her impoverished past and her stunted expectations for her life. A good match with other recent Civil War-era novels. such as Rosemary Wells's Red Moon at Sharpsburg (2007) and Christopher Paul Curtis's Elijah of Buxton (2007).

It's 1875 and the wounds from the Civil War are still raw for the poor and struggling folks of Mississippi. The houses have been razed, the trees burned for fuel, and the men are injured, maimed and mired in sadness. Times are tough and life is full of danger from ruffians and vigilantes. The slaves have been freed, but they are just as tied to white landowners as they ever were. Across the swamp is a wooded no-man's- land called No-Bob, populated by the O'Donnells, a family known for their cruelty, bloodthirstiness and constant unpleasant presence, usually begging for money and food. They marry young, bear children and marry them off to each other. Addy's father is the meanest and fiercest of all the O'Donnells and when he leaves his wife and heads for Texas, his bereft wife abandons her daughter to follow him. This leaves Addy in the care of newlyweds Frank and Irene, the schoolmaster and his wife. Addy's extremely rough up-bringing has prepared her well--she knows how to build a fire, keep a house, build a shed and keep herself alive on next to no food. When her father resurfaces, stealing eggs from Frank's chicken coop, Addy must return to No-Bob with him. "Pappy. He is bad and mean and dangerous, but he is still my Pappy," she says. When Addy discovers a devastating secret about her father and his connection to the violence that is running rampant in the area, she makes the hardest decision of her life. In this sequel to her Civil War novel, How I Found the Strong, Margaret McMullan has created a deeply philosophical, first-person account of life in the Reconstruction era that is heartbreaking and uplifting at the same time. Echoes of the present are impossible to miss--life under occupation, the reaction of the insurgent Klan, and aching poverty. It's the kind of book I love, one that makes me want to read everything McMullan has written. Twice.

Set in rural Mississippi during the hard years of Reconstruction, this novel follows the life of 12-year-old Addy O'Donnell. Abandoned by her parents, she is taken in by a pair of newlyweds, in spite of Mr. Frank's concern that the O'Donnells are "trouble." Addy knew hunger and mistreatment in No-Bob, the hollow claimed by her notorious extended family, but she feels a loyalty to them even as she begins to thrive in her new surroundings. Life takes another unexpected turn, though, when a new friend is killed in a church burning perpetrated by the newly formed Ku Klux Klan and then Addy's father shows up a few days later to take her home. Addy loves her pappy, but back in No-Bob, she begins to see the truth of his actions and nature and she realizes that she is going to have to make a decision that will determine the course of the rest of her life. While there are countless novels set during the Civil War, few focus on Reconstruction. This era in which the South was forced to reevaluate itself serves as a handy metaphor for Addy as she reevaluates her own life. McMullan fills her engrossing, character-driven story with well-chosen details that paint a clear, believable picture of a time long past. This will make a fine addition to libraries seeking to expand their historical fiction offerings.

McMullan stays true to the language and spirit of the time. The reader is constantly privy to Addy's sensitive observations and wisdom. 'The world is a powerful place, but then again, so are we.' Her grit and determination against great odds will land this title on the "Strong Girls" bibliography.

"When I Crossed No-Bob" is a powerful follow-up to McMullan's critically acclaimed "How I Found the Strong.

Suspenseful plotting and language that whispers with the soft cadences of a Mississippi pine forest and crackles with wry wit blend with very appealing characters to craft a compelling portrait of life in Mississippi during Reconstruction. Most effectively explored is the profound ambivalence Addy feels toward her reputation as a hardscrabble O'Donnell; she is drawn to and respects people who show the kind of viper meanness, wily opportunism, and headstrong rebellion that she has grown up around, but she sees her people with new eyes after her stay with the kind and upright Russells. Though the book is set in 1875, the thematics of personal and community reconstruction, coping with residual bad feelings, making tough moral choices, and finding grace and healing after trauma find relevant reflection in many contemporary circumstances.

McMullan allows Addy to tell her own tale in an ingenuous present tense.

This first-person, present-tense narrative makes Addy's story vibrant and realistic. In a manner befitting a young girl, she asks universal questions: Who am I? How should I behave? Laced with humor, ingenuousness, and wisdom, her voice rings true. The story is gripping and filled with interesting characters. Addy ultimately returns to the Russells where she helps deliver their first child and then uses her knowledge of herbal medicine - learned from Momma and a Choctaw woman - to cure mother and baby of fevers. She opines that hardships can be character builders and concludes that just because she was born into No-Bob, it does not mean she has to stay.

Set in the rural South 10 years after the Civil War, McMullan -- who proved she knows her stuff in the award-winning "How I Found the Strong" -- returns to the past she describes so eloquently...Authentic, intriguing characters with names like Little Bit, Matty Lou and Zula add far-reaching depth for both male and female young audiences. Read full review.

A gritty, beautifully told story about a girl's adjustment to life after the Civil War, and how she tries to rise above the bad reputation of her entire family. Read full review.

Ever read a book about a poor white trash family? I sure hadn't. (Can you even name a book besides To Kill a Mockingbird or Gone with the Wind that includes white trash characters?) Talk about an untold story. And God bless it, the voice is killer and the characters endearing.

Everyone knows that the O'Donnell's are just plain mean, evil and bad. They've got their own patch of land, called No-Bob, and no one wants to have anything to do with them. But twelve-year-old Addy doesn't like having that reputation. So when she's abandoned by her mama, who goes in search of her pappy who already abandoned them, she's taken in by Frank Russell and his new bride. Addy is determined to prove that she's not like the rest of her kin. But when she witnesses a terrible tragedy that's cause strikes close to home, Addy's old world comes back to haunt her. Addy finds herself pulled back into her family and all the terrible things that go along with them, and now she must make the biggest decision of her life. Does she have the courage to betray one of her own? A good look into post Civil War south.